Posted by: Team | NewsPatrolling August 5, 2016 in Fashion Comments Off on Royal Weddings of Small Screen

Recently on 8 July 2016 in Bhopal the love birds got married,according to Hindu rituals.Their marriage caught everyone’s eye.Every lovebird wants that kind of marriage ceremony,that is called like fairy tale.After marriage the couple host receptions for twice at Chandigarh and as well as in Mumbai also which was attended by their friends,relatives and many other celebrities. 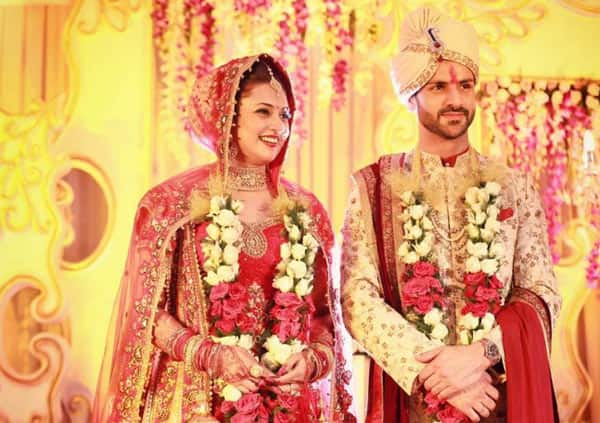 2- Sanaya Irani and Mohit Sehgal
The Cutest couple of small screen tied knot in Goa on 25 January 2016 at Planet Hollywood Hotel.The First meeting of this couple was on the set of well know serial “Mile jab Hum Tum”.They were dating each other before marriage since last 4-5 Years. 3- Drashti Dhami and Neeraj Khemka
With Neeraj Khemka ,Drashti Dhami tied a knot on 21 Feb. 2015. In Mumbai the Couple had a hindu wedding ceremony. The Couple also had other marriage functions in Mumbai and after taking the wedding vows ,they has a grand reception at wedding place itself in the presence of their families ,relatives and friends and other person from professional ,Business world. Neeraj Khemka who came in lime light after got in to a relationship with television actress Drashti Dhami is a NRI business man who settled in Mumbai now.

The couple got hitched on 3 September 2014 at ITC Maratha,Mumbai.They had a very small ceremony at their marriage.As it was only family affair at small stage attended by family members ,relatives and close friends.But after private ceremony of their marriage ,soon they hosted a grand reception party for their friends from industry.As Niketan Dheer is son of well know actor Pankaj Dheer,and Kratika sengar is a well know actor of small screen,the wedding was attended by biggies from Bollywood.

This much in love ,the two well know name of television world tied a knot on 7 December in 2013 in Chandigarh.Not only they had a grand Indian wedding as well as a lavish reception also which was attended by many big personalty from Indian television world.

Boys Haircuts You Should Try This Year